Another miniature I really like from Meiko Miniatures. While not the Troll they sell with their Orc team, I prefer this troll. He does, however, look to have some issues regenerating (hopefully that doesn’t foreshadow his in-game performance). I didn’t want to paint the flesh blue as when combined with my blue uniforms it would make everything look pretty monochromatic. Instead I picked a greenish-yellow scheme that I’m pretty happy with. I might use the same colours for my goblins.

For the straps, blue and white I used the same as for all the Orcs. The new colours on this model follow:

I’m really stoked with how he come out. I’m actually starting to see some development in my painting, and I’m getting to the point where I’m pretty proud of what I’m producing and when they get put down on the table. He’s a pretty large beastie and I’ll wrap up with a shot of him with a Lineman and a Black Orc. I’m also pleased with a skin variations in the three models, there’s enough similarity between the Orcs and a decent variation to the Troll. However, they’ve also got enough commonality to tie them together as a team. Another pleasing aspect is the skin colours and the uniform all work together. 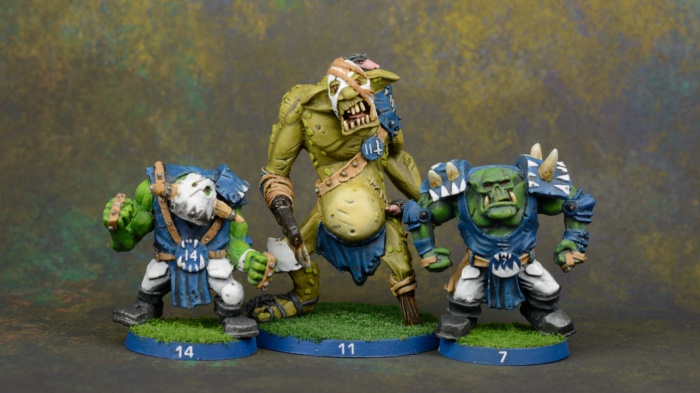