Very few original colours on these guys. The only thing I haven’t used on other figures is their flesh colours. Inspired by the success with my Troll I’ve put together another mix of colours that’s distinct from the other 3 combinations I’ve used (Orc, Black Orc and Troll). This combination is much more yellow with only a slight greenish tinge to the colours. Fortunately, my paint collection was initiated with a Vallejo Model Colour military set and so I have plenty of greens, browns, browny-greens and greeny-browns.

I’m fairly pleased with these guys. I’m also keen to see how they work out in the game. I don’t yet have a Goblin on my roster, but I do have a Troll so the One Turn Touchdown will be an option when I get one. 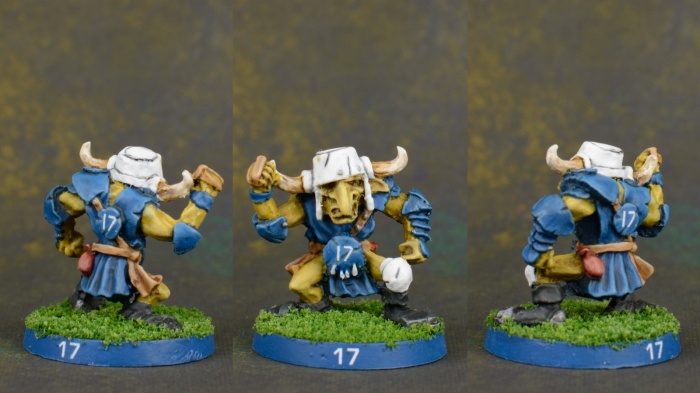 This project is now pretty much complete. I’ve got most rosters I think I would ever try to run with the Orcs. I could have more Goblins, or more Linemen. However, I don’t think I ever actually would. I’ve come close with the Linemen (all 4 have been used when injuries got up there), but I don’t think I’d want to run 5 and if I did I would just borrow one of the throwers. Any way future updates on Orc State may include a couple of star players and – if I get really excited and find some cool miniatures – some sideline staff.

The last picture shows all the different skin tones I’ve used thus far. I don’t think I’ll use any others. Any staff or star players will probably use one of the existing groups. 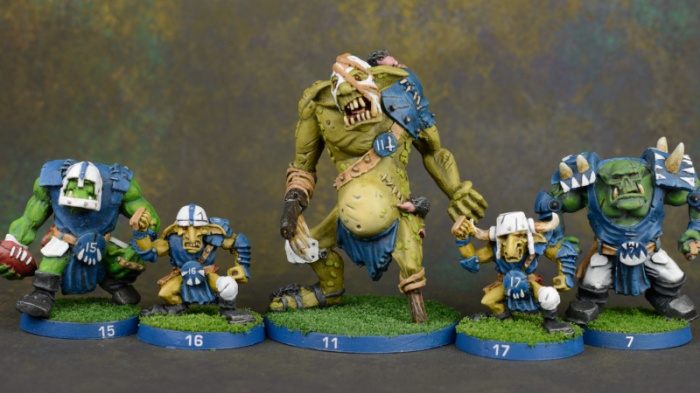