One of the options for a Carthaginian ADLG army is Gallic Warriors. I’ve painted quite a few of these as I think they’ll be useful for a number of forces. I think these could be run as Gauls, Celts, Britons or even Germans. 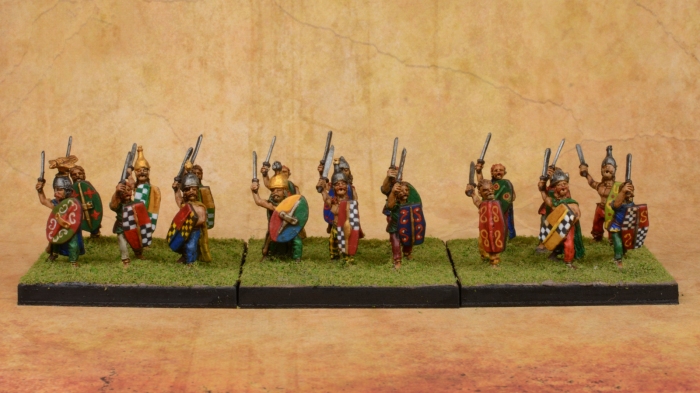 Some of the colours I’ve used are below. However, I didn’t record what I used for the fronts of the shields, I just grabbed random slightly muted colours for most of the shields. One thing I will comment on is my method for white which i think is pretty useful. I start with an undercoat of Sky Grey (VMC 70.889) on the area I want to be white. This colour is a very light grey that has really good coverage. I only thin this paint a tiny amount (and usually 1 coat is enough to get good coverage). Once that is on I paint an actual white (VMC 70.950) over the sky grey. I thin the white quite a bit and it often takes a couple of coats. But I don’t find it particularly necessary to get the the very edges of my sky grey area. The basing is the same as for the Numidian LI.

The shields were all hand painted (which is probably pretty obvious). I’m very happy with how they’ve turned out (particularly the checked shields). Prior to starting I was concerned I wasn’t going to be able to get neat/even looking squares. While, they’re not perfect I think they look pretty good and at table top distances they look great. All based together (particularly with the offset pictures) they look like a motley band of colourful barbarians. 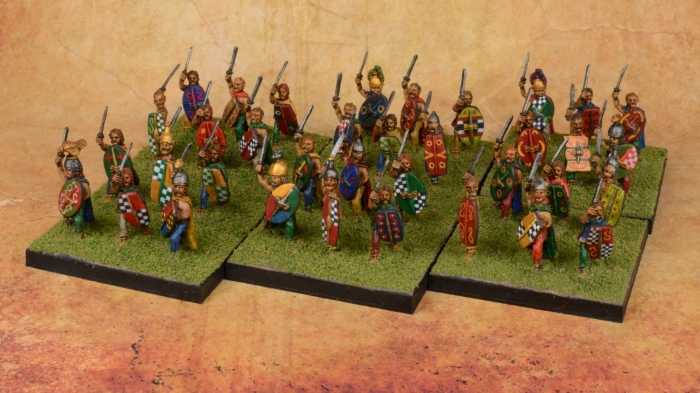 I’ve also based them as Medium Infantry (rather than Heavy) for ADLG on 40x40mm bases. I used 3mm MDF with magnetic sheet already attached which I get from Olympian Games here in Australia. The miniatures are from Magister Militum/Chariot Miniatures. All the different poses come from the one pack (BAR7 – Barbarian Warband with Swords). There’s 5 distinct poses, but then there are a number of shield and helmet variations to add even more variety. A couple of the poses have much more impressive helmets, so you could easily separate out a few of these models and get a command unit using this pack. They come 8 to a pack and I ordered 5 packs to give me 40 gauls, and only 1 was a miscast (missing his rear leg, I could have used him with some work, but I only needed 36). There are some mould lines, but they’re fairly easy to remove. My Australian source for these is Mick’s Metal Models (who I’d give a big thumbs up to, as they’re great to deal with). They’re website is pretty simple and you order via an email, but I’ve found him quick to reply and good at getting the right thing shipped.

That’s all for now, I’ve got a couple of other units coming soon for this project. Maybe at some point I’ll paint some actual Carthaginians for this army.